Fruits and Vegetables: Loaded with Nutrition

Fruits and Vegetables should be a major part of our diets.

They are loaded with vitamins, minerals, fiber and antioxidants. Vegetables are the most nutrient dense food per calorie on the planet.

I think most people-especially most people who read a blog like Real Life Health, already know that fruits and veggies are important for a healthful diet. They know they should get “more” of them in their diet, but it’s more of a question of how to do it than what to do. I’m going to focus this post on some ideas for ways to increase your servings of fresh produce.

When people ask me how to eat a more healthful diet, and where they should start, this is my number one tip. Eat more of the good stuff so that you’re less hungry for the food that doesn’t really nourish your body. The concept of crowding out is the opposite of deprivation. Eat lots of fresh produce, healthy protein, fat, dairy and some grains. Then, you won’t be as hungry for an Oreo cookie.

I don’t recommend dieting in the traditional sense, but I do find that sometimes it can be helpful to totally step away from refined sugar and flour for a while. This will help to retrain your palate and allow you to taste the natural sweetness in real food. Even things that you don’t normally think of as “sweet” start to taste sweeter when you don’t have processed food to compare them with. 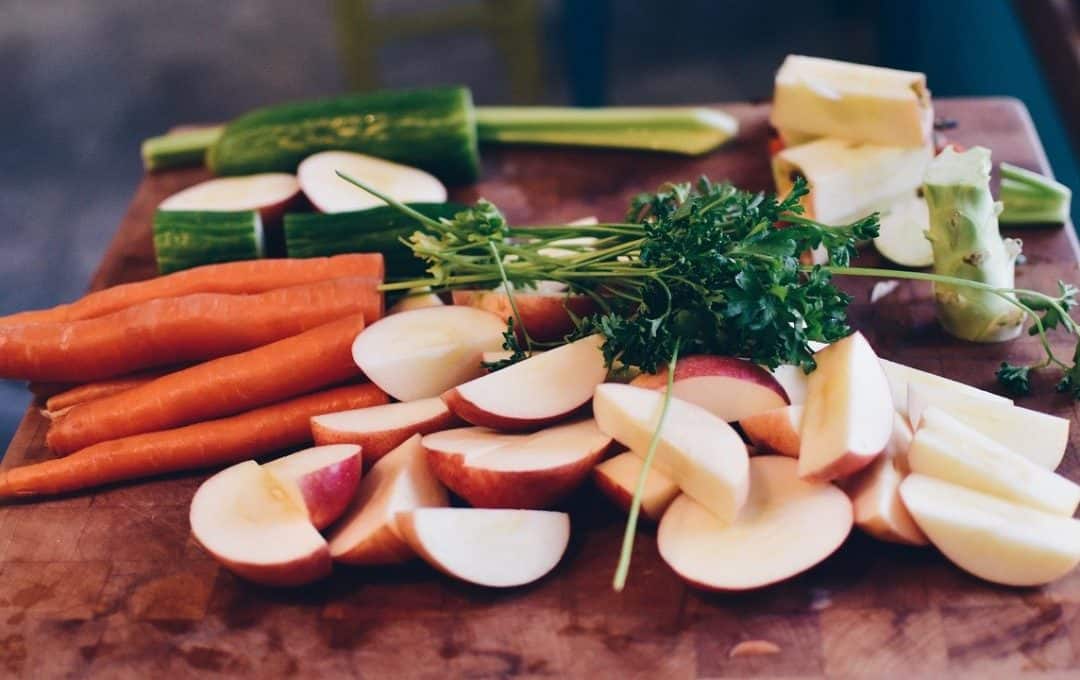 How to get more fruits and vegetables in your diet

Include it with every snack. Here are some ideas:

Plan ahead. Keep dried fruit in your purse or car for an emergency snack. Throw sliced celery in a container before you head out so you have a quick snack on hand. It can be harder to get healthy food at the last minute because it usually takes some prep (although most grocery stores sell some precut produce, so that’s not really a good excuse!), but planning ahead is always a good idea. I also find that if I don’t plan ahead I get really hungry. Then, when it’s time to eat, I’m starved and I need energy that’s going to get to me quicker than fruits and veggies would (i.e. pass me some bread!)

Dress it up. Don’t be afraid of fat. Not only does fat make your food taste better, many of the vitamins found in vegetables are actually fat soluble. That means eating fat with your vegetables (such as butter) actually helps you get more nutrients from them. It also makes them taste better, which makes you want to eat vegetables again instead of suffering through them even though you don’t like the taste.

Be creative. Try to add fruits and vegetables to every meal and every snack. It’s easy to add spinach or other greens to a smoothie for breakfast, or throw in some zucchini with your scrambled eggs. Having hot cereal for breakfast? Throw some berries or banana on top. A sandwich for lunch? Get a side of sliced tomatoes instead of french fries.

Listen to your body. I believe in listening to your body, so if you’re really craving popcorn, should you instead have some sliced bell pepper? No! Have the popcorn! But with it, eat some fruits or vegetables that sound good too.

Mix it up. If you are stuck in a rut, try something new! There are so many awesome fruits and vegetables to try.

How do you get lots of fruits and vegetables in your diet?

What’s so bad about Sugar?

What is Health? It’s more than just Fitness

Louis is a Registered Nutritionist who has been with Big Blue Test for almost five years now. Starting out as a freelancer, Aston is now our in-house Nutrition Expert. Before we make any claims or suggestions related to nutrition in our content, Louis is the go-to person to work out any kinks or cut any misinformation in the bud. He completed his undergrad in Nutrition in Canada and then pursued a Master’s degree in the U.K..Louis believes in the power of micro-nutrition and can usually be found sipping away on green vegetable juice. He loves spending weekend on hike trails or rock climbing. An avid cook, Louis also works towards helping people with meal-prep news and even assisting them with recipes that can be used by the busiest of people.

How Healthy Are Green Juices: The Rewards of Juicing

If you haven’t been living under a rock for the past decade or so, you’ll know that green juices are...

What’s so bad about Sugar?

There’s a lot of talk about sugar being bad for you. We know that a lot of sugar isn’t good...

10 Probiotic Foods that You Shouldn’t Skip

The specific strains of yeast and live bacteria that are effective for the human digestive system are called Probiotics. These...

What is Health? It's more than just Fitness

No Result
View All Result